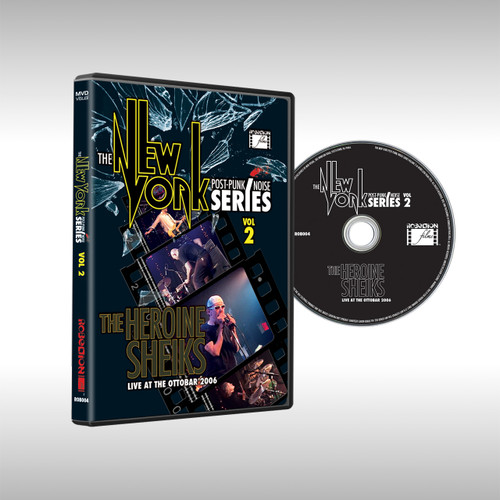 THE HEROINE SHEIKS, led by SHANNON SELBERG, the outrageous frontman of the legendary COWS, was originally a collaboration with SWANS guitarist NORMAN WESTBERG. During the band’s New York tenure many local musicians joined forces with SELBERG to produce some of the best NOISE ROCK ever to come out of Gotham. With a stage performance both frightening and funny, the SHEIKS delivered blistering punk rock, noise, and heavy rock, often accompanied by SELBERGS’ toy Casio keyboard run through a custom bass rig.

VOLUME 2 - THE HEROINE SHEIKS: LIVE AT THE OTTOBAR, 2006. Shot with a professional touch by fans and enthusiasts, this show represents the last NYC lineup of THE HEROINE SHEIKS, mere months after their last nationwide tour. For the NY chapter of the SHEIKS’ final show, SELBERG’S antics are in full force in this performance before a packed venue in Baltimore, MD. Never released, until NOW — remastered and color-corrected in its entirety by ROBELLION FILMS.

• THE HEROINE SHEIKS: LIVE AT THE OTTOBAR, 2004. Originally appearing on hand-made DVDs sold only at shows